Kevin Garnett will soon be anchored among the kings of basketball at the Famer Naismith Memorial Hall, but he has no intention of forcing a reunion of the now insane Boston Celtics ’08. If Garnett and Paul Pierce always seem to be eye to eye, that’s not the case for the third propeller of this trio, Ray Allen.

Garnett opened the door to his Hall of Fame in Allen, despite the old argument about how his stay in Beane Town ended. But he won’t force anything behind the scenes:

Whatever. Garnett told Gary Washburn of the Boston Globe on Monday. I wouldn’t dare ask those guys. I’m not the type to do that. If someone wants to do something alone, fine. This team has had contact with all members of this team in 2008. We’ll be brothers forever. No more, no less.

I don’t want any games. If it’s real, it’s real, if it’s not real, it’s not. People who want to show their appreciation for something, that’s cool. I would never apply that to any of these guys. This crew, they’re brothers for life.

Garnett and Pierce were furious at Allen, who left the 2012 Celtics for Miami Heath. Pierce hoped for a warning, while Garnett could not bear to see Allen leave the team that tried to break their command.

Because Pierce was retired, he considered it yesterday’s snow, but Garnett was known for his resentment, and remained so until recently.

Allen was included in the Hall of Fame in September 2018, but neither Pierce nor Garnett were present. Only time will tell whether Allen will regain these feelings after Garnett’s inauguration or whether he will make an extra effort to attend an unforgettable ceremony, including the posthumous assumption of office by Kobe Bryant and Tim Duncan. 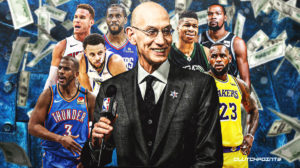 Nouriture by Anmol Feeds set to usher socio-economic growth for the fishing communities of...