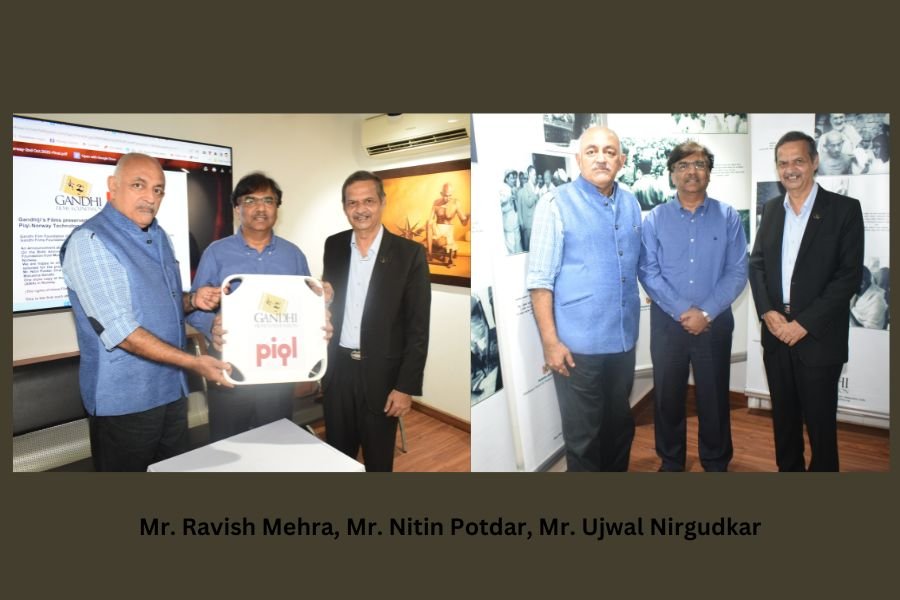 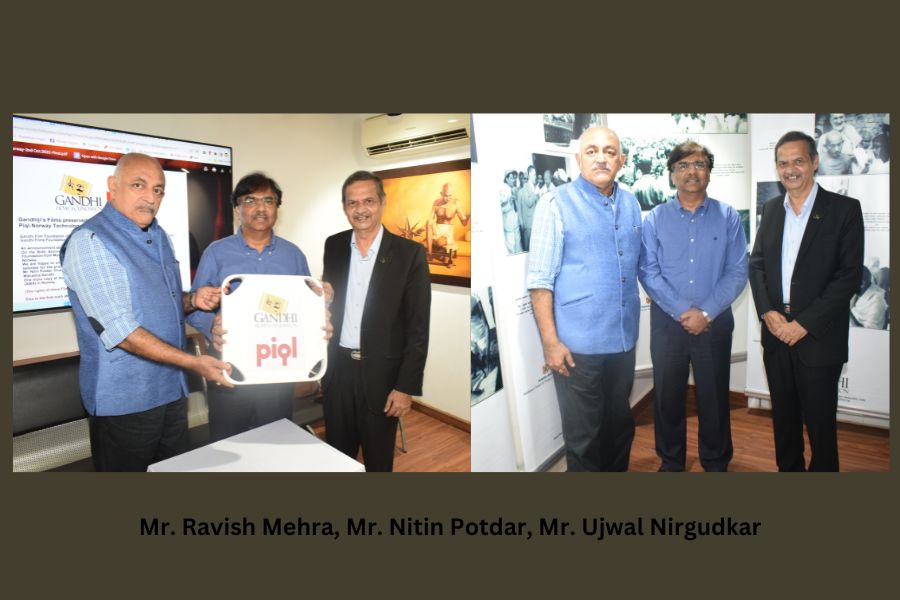 An Announcement about this association was jointly made on 2nd October last year.

We are happy to announce that this project has been completed now & the following two films selected for the project are handed over by Piql Representative from India Mr. Ramesh Bajaj to Mr.Nitin Potdar, Chairman, Gandhi Films Foundation on 3rd October 2022,154th Birth Anniversary of Mahatma Gandhi. One more copy of the prints will be stored at sub-zero temperature at Piql’s Arctic World Archive (AWA) in Norway. The rights of these Films will always remain with Gandhi Films Foundation.

1)Documentary on Round Table Conference in London (1930-1932). This documentary also consists of Gandhiji’s visit to Switzerland & Italy. Majority of the Audio content is in English.

Piql’s technology and process is a new patented solution of writing digital data on black & white film, which has a life of more than 1000 Years. This life can be extended further if the recorded film is stored at sub-zero temperature at Piql’s Arctic World Archive (AWA) in Norway.

Mr. Nitin Potdar, Chairman Gandhi Films Foundation, Mumbai quoted “The Films of Gandhiji contain his valuable teachings which needs to be preserved for our future generations and if we don’t do it, I guess we would be failing in our duty towards our Country.”

Mr Rune Bjerkestrand, Managing Director, Piql, Norway said “We are delighted to be supporting this project and preserving this prestigious audio-visual documentation of Mahatma Gandhi for the cultural heritage for the future”.

The main aim of Gandhi Films Foundation is Preserving Rare Clips for everyone eager to know about Mahatma Gandhi’s dedicated life for Human Beings. Many unknown cameramen in this world have shot these important events of freedom struggle and different parts of Gandhi’s life at that time with many difficulties which made it possible for us to obtain these rare clips under one roof and present to the future generation through our website. Gandhi Smarak Nidhi, New Delhi have obtained all these clippings and Gandhi Films Foundation preserving these rare clips for the students, researchers and for everyone interested in Mahatma Gandhi and eager to know about his dedicated life for human beings. The foundation aims to create perpetuate the memories of Mahatma Gandhi with the active participation of the common man in India. Objectives of Gandhi Film Foundation is to create live memorials of Gandhiji instead of erecting his statues and thus created 48 institutions spread over all Indian states.

About Piql: (www.piql.com) : Piql is a specialist provider of digital preservation and long-term data storage. With a global footprint, we offer tailored services to a range of sectors including historical and memory, audio visual, private enterprise and government.  Piql’s purpose-built technology can keep data alive for hundreds of years, without the need for migration. The data is secure, unalterable and can be recovered without the risk of data loss, no matter how long it is stored for. It is the only service of its kind and the only offline, migration-free technology available for long term digital preservation.  Piql also offers storage in the Arctic World Archive, an offline vault deep in an Arctic Mountain holding precious world memory. The archive ensures the protection of the most sensitive and irreplaceable data for future generations. Growing all the time, the Archive holds treasures including The Scream by Edvard Munch, ancient manuscripts from the Vatican Library, historical space data from ESA, open-source code from Github, records from various national archives, among many others.

If you have any objection to this press release content, kindly contact pr.error.rectification[at]gmail.com to notify us. We will respond and rectify the situation in the next 24 hours.