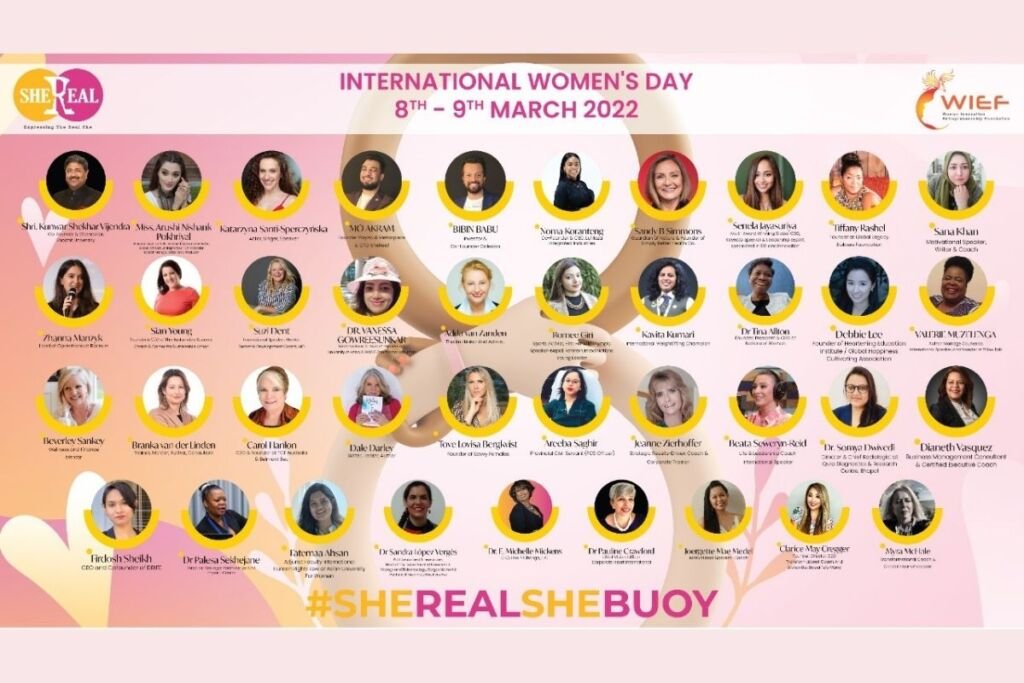 March 15: Women helping women is the new era we live in. Breaking all the stereotypes and barbs that have been said by many before, the whole event that was organised focused on growing the right seeds of uplifting women in the minds of every single person attending the event. It opened a lot of new perspectives for the whole audience that were never paid attention to by many guest speakers. On March 8th , 2022, on the occasion of International Women’s Day and to celebrate all the existence of women out there, SheReal, in collaboration with WIEF (Women Innovation and Entrepreneurship Foundation), pulled off the best event of all time. With the presence of super achievers and influential women, it indeed was a great event. SheReal is a community of professional networking platform reserved exclusively for women. It is a space where women share, care & grow together.

The central idea or the aim behind conducting this event was to empower every soul of every other woman present at the event or indirectly present out there. All the speakers illuminated the audience with topics like gender equality, women’s inclusive society, and women’s power to change and related topics, nationally and internationally acclaimed and recognised speakers were the part of this event. The event was for two days, starting from 8th of March, 2022 to 9th of March, 2022.

Event was Started was Dr. Shweta Singh followed by various guest speakers. Dr Shweta firmly believes that, “Woman cannot be held in boundaries, limitations irrespective of their location, age, community they share the same emotional journey and are forever ready to uplift other women. No boundaries can stop us.”

There were a lot of speakers speaking on different topics, but everybody was aiming to pull up every woman instead of pushing in. With changing times, it has become an unsaid duty to lift up women and make their presence important. All the speakers not only pointed out issues that needed to be resolved but also put forth a lot of creative and unique ways that could be chosen to make things better and easier. The women speakers carried experience on their backs from numerous fields, such as women leaders, entrepreneurs, writers, activists, film producers, relationship coaches, etc. The event’s central theme was # sherealshebuoy, which focused attention on the idea of women anchoring other women by assisting them in gaining a platform and reverence in a rapidly changing environment. Women have not left any ground untouched by marking their presence in every aspect of their lives and career choices. They also made an effort to mentor and direct by sharing their real-life experiences to give an authentic touch to everyone listening, which involved the audience wholly in listening.

The words of every speaker who were professionals and experts were to promote the idea of women supporting women and how women together are stronger and fiercer.

It also included a few topics which needed to be shed light on for the changes we as a society expect, such as breaking the bias, voice of others, mental health, women and breaking the glass ceiling, women’s leadership, and the need for equality in society. The event spread awareness and equally carried a fun element with it. It was spread out over two days, with the idea of sisterhood and significant conversations being spread out over the course of the two days. It is said to be India’s first ever professional networking platform for justifying the enthusiasm of women across the globe, providing a space which is equally integrated. focusing on binding each other up in everlasting relationships and creating a room that is accessible to people from diverse backgrounds.

SHEREAL is also all set to launch its own and the world’s first networking platform on web 3.0 with the intent of mutual growth not just this but they will soon launch fantasy games and help create creator’s economies through its own social media platform. The platform will have Metaverse, NFTs, and tokens exclusively for women. Putting light on women’s empowerment They are doing the best they can.

As they say at SheReal, “By the Women, Of the Women, For the Women.” SheReal aims to create a world with gender equality free of biasness and stereotypes and discriminations. A world where one is free to express her thoughts and feelings.

To know more about SheReal,

Bring the art of Snac-king to your screens!