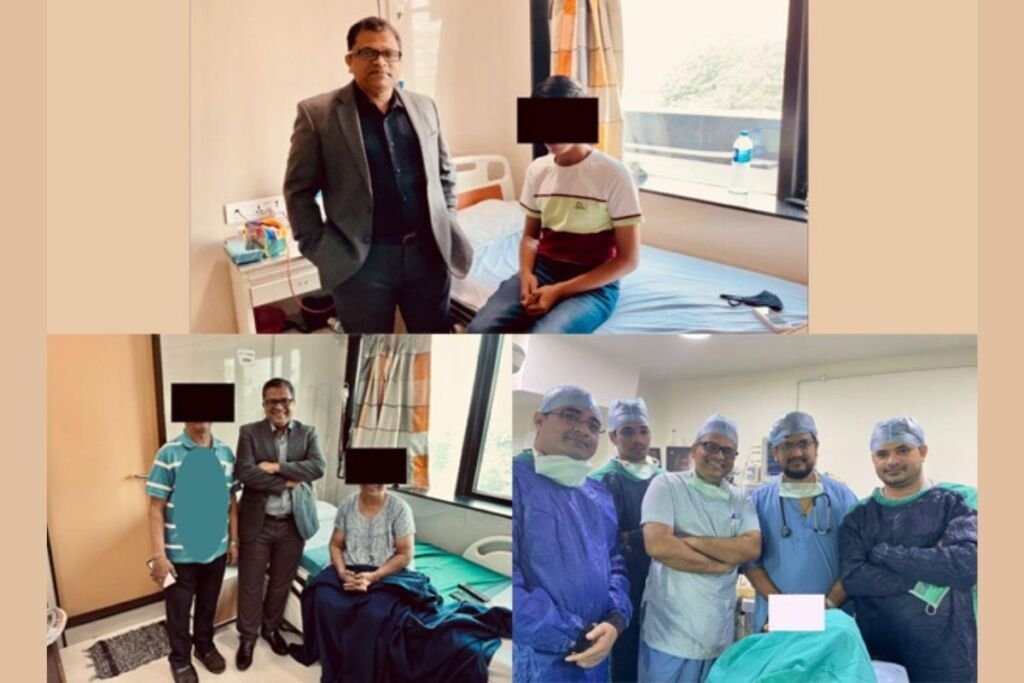 February 7: A senior citizen, a wealthy couple Mr & Mrs Verma from Mumbai arrived in Surat upon hearing about Dr Subodh Kamble. Dr Subodh Kamble is a Surat based urologist migrated from UK who has been successfully dealing with urinary leak problems. The lady had been suffering with a continuous urine leak for 24 hours a day and having to wear a diaper 24 hours a day since 2012. This was due to her Urinary Sphincter, which had stopped working properly. Urinary Sphincter is the valve that holds the urine in the bladder and prevents the urine from leaking out. The urinary Sphincter’s function is to open the bladder when the brain gives signals to the bladder to empty it.

Unfortunately, in Mrs Verma’s case as soon the kidney collected urine in the bladder it was coming out, as the urethral sphincter had stopped functioning normally. As a result, her bladder was not able to store the urine and she would leak 24 hours a day. The family had tried many known urologists of the country but no relief from her symptoms and surgeries performed on her were failed. Mrs Verma herself and the family had lost all the hope of Mrs Verma leaving a normal life ever until they read about Dr Subodh Kamble.

Mrs Verma’s problems were complex, that included previously failed surgeries, childbirth and her increasing age resulted in her urethra (water pipe) to shrink in size to less than 2 centimetres. This is less than half of the normal size urethra in females. Whilst normal size urethra in female is around 4.8 to 5.1 centimetres her urethra was only 2 centimetres long. Urologist in Mumbai and other places of India had given up on treating her. Due to such a short urethra most of the treatment options available in India had not worked and were not going to work for her.

The couple had complete faith on Dr Subodh Kamble that he would cure her and with that faith they arrived to Surat well prepared financially for any surgeries or any treatment and any length of stay they might require.

This synthetic material in a gel form is inserted which forms the cushioning around the Urethra (waterpipe) where the Sphincter (urinary valve) is located. This material stays in body providing long term solution and works together with natural movement of the Sphincter releasing urine when the person need to urinate and stopping it from leaking otherwise.

Whilst Urethral bulking is significantly cheaper option and if needed it can be topped up through scarless surgery. The admission in the hospital is short. Patient does not require any tube in the bladder and becomes mobile same day. The urethral bulking surgery helps patient to control the urine leak in more natural way and without them having to do anything additional. There is no artificial closing and releasing that patient required to do and it gives them normal natural urination.

Around same time of Mrs Verma’s surgery, well known businessman but a desperate father of 17 years old boy from Dhule district arrived to Surat with dysfunctional Sphincter problems. The boy was having to use penile clamps and diaper to deal with continuous urine leak for 24 hours. He had his urine leaked in any position whether he was sitting idle, lying down, walking, running, jumping or doing any trivial activity. The boys was absolutely tired of using the penile clamps which was causing his penis to be disfigured. Diaper was giving him rash, skin irritation, superficial bruises and as filled up diaper was becoming heavy and bulky for him to walk around in at school or college.

The parents had consulted many Urologists around the country without any success. They were told that the leak was due to the damaged nerve and there is no solution for it. The boy would have to live life with the problems. Some doctor in Mumbai suggested Mitrofanoff procedure, where the urologist creates a new tube on a child’s belly through which a child can urinate (pee) by using a catheter (putting a small tube into the new tube). The new tube is made from the appendix. It connects the bladder to a small hole created in the belly button or in an area in the lower belly. This is done through opening the belly, dissecting the intestine and the appendix as well as bladder. This is no doubt too extreme and irreversible procedure. Besides the boy would have had to catheterise himself several times a day through the tube on his tummy to get the urine out but the primary problem of leaking urine wouldn’t have been sorted with this unless they closed the natural end completely and permanently. Needless to say, the family was not keen on this.

Someone in their business network in Mumbai recommended Dr Subodh Kamble’s name and the family travelled to Surat. Dr Kamble offered the boy same surgery as Mrs Verma and the family made an instant decision. A surgery was performed, and the boy was relieved from years long urine leak from next day. First time in his life he went out shopping from the hospital without a diaper or the penile clamps.

It has been several weeks since both of these surgeries and both patients are doing absolutely fine, and living a diaper free normal life. Dr Kamble regularly received positive updates from Mrs Verma’s husband and the boy’s father. Together with updates lots of blessings are also always sent.

Finally, Dr Subodh Kamble is thrilled to share the news that he has been successful in restoring the function of the urethral sphincter with a synthetic material. These surgeries could be ground breaking and turning point for people having a urine leak problems after the prostate cancer surgery as well as for people with urine leak due to dysfunctional or a weak sphincter.

Men and women including young boys and girls should not have to suffer in silence as the treatment is now available to treat all types of urinary incontinence at doorstep in Gujarat. Urine leak problems are treatable without drastic and irreversible surgeries.

Learn more about him at https://www.subodhurology.com/